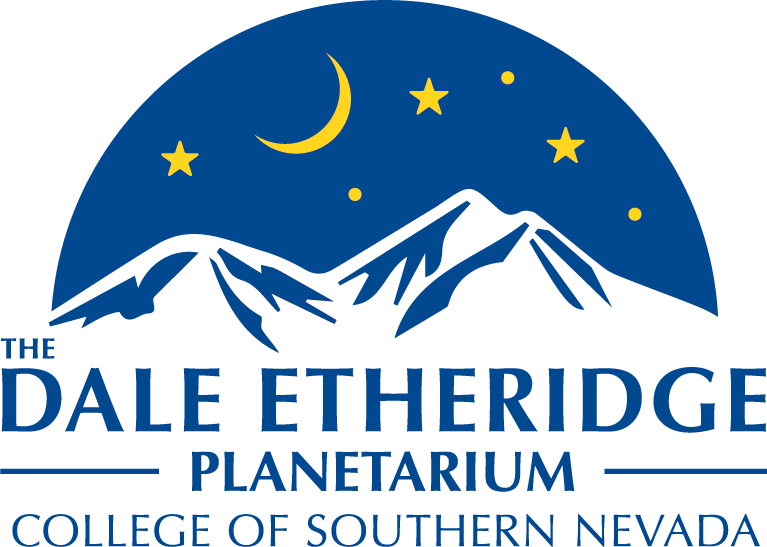 Experience the desert sky...inside and out!

Note: The Planetarium is open to visitors again.   You can make reservations by calling 702-651-4505 or through our online reservation system.

Reservations are not required, but each guest will be required to sign in with contact information. This contact information will be maintained for 60 days as required by CSN and the Southern Nevada Health District.  It will not be used for any purpose except contacting visitors in the case of possible exposure to COVID.  All visitors will also be required to do a self-health check before their visit.

Welcome to Southern Nevada’s only public planetarium, where the stars are literally the stars of the show. Our 66-seat theater features an Evans & Sutherland Digistar 5 high definition hemispheric video projection system. By creating virtual realities on our impressive 30-foot dome, we surround visitors with simulated educational and entertaining content in an environment that is unparalleled in Southern Nevada.

We serve a hybrid role within the College of Southern Nevada and to the community at large. In our capacities, we fulfill three primary objectives:

With the reopening of The Planetarium, there are rules that we must all follow.  Masks are required at all times for unvaccinated guests. We ask that all guests do a self-evaluation for COVID exposure or symptoms before attending a show.  You will be required to sign-in and provide contact information, as well as agree to inform the Planetarium or CSN of any change in symptoms within a certain time frame after attendance.  We may also limit the number of guests in the shop at any one time.

We ask that you please prepay online through the reservation system or use contactless methods of payment in the shop.  We will accept cash payments, but we would prefer not to do so at this time.

We will NOT be able to resume telescope observing at this time.  When it is safe to do so, we will.

Please note that there is no late seating for public performances.

*Seniors over 55, children under 12, active military, and CSN students.

For groups of 15 or more, please see our group reservation policy.

If you need assistance,  please contact the Planetarium ahead of time and we can try to find an accommodation that will work for you.

Student Appreciation Night:  Students with a valid CSN Student ID may attend the 6 pm, 7 pm, or 8 pm show for free on the first Friday of each month.

The Big Dipper Program:  Our ticket rewards program. One ticket purchased earns one star on our Big Dipper punch card. Once all seven stars in the Big Dipper are punched, Big Dipper card holders earn one free ticket and a new punch card.

We aim to provide a cost-effective, high-quality educational and entertaining experience for your public school, private school, home school collective, or other private group. As Southern Nevada's only public planetarium, we are able to guide your group on a one-of-a-kind journey through many scientific disciplines.

All of our private shows consist of three parts:

Total show time varies from 45 to 60 minutes depending on main programming selection and amount of group questions. If your group has specific time constraints, please let us know in advance and we will do our best to accommodate you.

The Planetarium at CSN has a maximum seating capacity of 66 total people and cannot accommodate more.

For the summer of 2021, the admission fee for any private group will be $50 no matter the size of the group (up to 66 people)  The normal admission price for private groups is $2.00 per person (all students and adults included). There is a minimum fee of $50 (up to 25 people) and a maximum fee of $100 (50 or more people) for each individual show.

Recommended shows for each age range:

Note that these are simply recommendations. You are free to choose any show on this list for any group.

Please be aware that there are some topics covered in select shows that may be sensitive to some groups. The Planetarium at CSN is an institution of science and will educate all audiences from a scientific perspective. Please feel free to discuss any questions, hesitations, or concerns when making your reservation.

New visitors should be aware that it is advisable to arrive 15 minutes early to ensure that you can locate the Planetarium and purchase tickets. We do not offer late seating under any circumstance.

The Planetarium at CSN is located in the South Building of the North Las Vegas campus of the College of Southern Nevada:

Friends of The Planetarium receive a 10% discount.

Getting to the Planetarium

From most locations, the easiest way to get to The Planetarium at CSN from most locations is to take the I-15. Take the exit East and drive approximately 1 mile. The North Las Vegas campus of CSN will be on your left.

Parking is free at CSN. The best parking lot for easy access to The Planetarium at CSN is adjacent to the Observatory. Look for a brick wall with the letter "O" on the side.

Please note that north is to the left on the map. 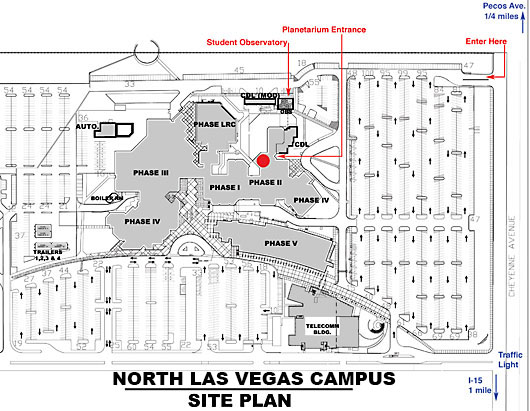 onOrbit is published by The Planetarium every month. We began publication in January, 1989. onOrbit replaced the Southern Nevada Sky Calendar which was published from 1977 through 1988.

onOrbit is also available by subscription at $12/year.

Looking for back issues?
Please contact the CSN Planetarium for past issues of our onOrbit magazine

Friends of the Planetarium

Please be a star in our sky! onOrbit magazine, our monthly astronomy publication, is made possible, in part, by donations from the Friends of the Planetarium.

Become a Friend of the Planetarium by sending an annual donation of $25.00 or more (check made payable to "CSN Foundation") to:

To become a Friend of The Planetarium, please send your tax deductible donation to the address above using our convenient application form.

For more information, please inquire in the Astronomy Store on show days or call (702) 651-4505 during regular business hours.

The Planetarium at CSN

The Planetarium at CSN, in cooperation with the NASA Ames Research Center, operates the Nevada Educator Resource Center (NERC). The NERC maintains curricular materials and lesson plans for K-12 teachers primarily in the areas of Space Science and Astronomy. Teachers are encouraged to come to the center and copy any of these public domain materials. These materials include print media, audio tapes, slides and video tapes. Startup funding for the NERC was provided by the Eisenhower Mathematics and Science Higher Education Grant Program.

Have you ever had a specific astronomical question that Google couldn't answer for you?  The Planetarium at CSN has a team of expert astronomers and astrophysicists available to answer any question that you may have.

1.  Why is Pluto not considered a planet?

Answer:  In 2006, the International Astronomical Union declared that they would no longer consider Pluto a planet because it has not cleared its orbit of debris and other rocky material.  Their declaration that this disqualified it from planetary status has received mixed reviews, with many planetary astronomers disagreeing with the IAU statement.  In fact, NASA is proposing a counter definition for a planet after their exploration of Pluto with New Horizons.  While NASA is trying to go through the proper channels within IAU to change their definition, the definition of a planet is not something that that IAU has unilateral discretion to determine.  They have merely declared themselves the arbiters of all space related decisions without having the true authority to do so.

Answer (by Dr. Stephanie Fiorenza):  As of right now, we can see space out to about 15 billion light years.  A light year is the distance that light travels in one year.  So what that means is that space is really, really big!

It is possible that there is stuff in the universe that's even farther away from the stuff we can see right now.  The trouble, though, is that we will probably never get to see these things because space is growing bigger and bigger, and more and more quickly, every moment!  So if there are extra things in space that are too far away for us to see, we probably will not ever get to see them because space keeps pushing them farther and farther away from us.

What this means is that we really don't know for sure when space ends.  You asked a question that still stumps even the smartest astronomers, Ari!  I hope that maybe one day, someone (editor's note: Or even you Ari, when you become a scientist) will come up with a better answer to your question.

Until then, we can do nothing but wait in wonder and awe! :)

3.  “My husband and I's first year wedding anniversary is Sunday and for our wedding, I bought us a star!  For our one year, I really want to surprise him and take him to a place that can show us our star for the first time.  Is there anyway CSN Planetarium can help me make this big surprise happen?” (From Shelby)

Answer (by Nick Juliano, Planetarium Program Manager): Due to the dim nature of 99.99% of stars typically on these types of registries (an apparent magnitude much lower than the human eye can see) in conjunction with the extreme light pollution in Las Vegas (I once lived within 5 miles of NYC and the light pollution here is much worse), it is our policy to not attempt these types of observations. Even with the greatest telescopes, the Las Vegas Valley is not very suitable for observing dim objects.

If you would like to observe this star, my best recommendation would be to buy or rent your own telescope and drive to a dark area to observe it. The nearest certified dark sky site is Great Basin National Park, and that is a great place for observing dim objects. Unfortunately, however, the last telescope rental place in the valley went under several years ago. We at the CSN Planetarium and Observatory lack the location to make these observations, and many other observatories require a research proposal to use their equipment or have it operated for you.

I wish I had better news for you. Good luck with your search, and congratulations on making it past what many say is the most difficult year of marriage. I wish you two many more orbits around our host star.

Answer:  Astronomers have not found any yet.

When astronomers look for extraterrestrial life, they look for single-celled organisms. Single-celled life came around on Earth long before larger life, and that is all we have to work with. So when we search for extraterrestrial life, we search for certain things: similarities between the other object and Earth (liquid water, oxygen, adequate temperature, carbon, etc.), indicators of life’s impact on the object’s geology, or life itself. Nothing has conclusively led to life so far.

5.  How do we discover exoplanets?

Answer:  There are three ways: